Do you sometimes spot a famous person in a film or on tv who looks just like your dog? Maybe its the grooming, colouring or just the look in his eye.

Some people believe that we choose dogs who look like ourselves. If this is the case, these celebrities should definitely consider the breeds of dog which are pictured alongside them here!

Here are 13 dogs who resemble famous people, past and present.

Have a look to see if you can see the resemblance?

Robbie Coltraine in character ‘Hagrid’ from the Harry Potter movies.

This could be a young Wolfhound. They both share the same ‘wild’ look.

This Schnauzer puppy has the same salt and pepper colouring and a beautifully groomed beard. Such a handsome chap!

Barbara Streisand in the 1970’s

A smiling Miniature Poodle with the same hairdresser!

Rowan Atkinson, in the character of Mr Bean

A rather disgruntled Pug!

Emma Bunton as Baby Spice back in the Nineties.

The Shih tzu has the same pigtails!

This Hungarian Puli has similar dreadlocks.

Baker Paul Hollywood from The Great British Bake Off

This Husky has the same piercing blue eyes and grey colouring.

This pretty Yorkshire Terrier has the same colouring, a cute top knot and big, bright eyes.

Here we have a young Brad Pitt.

See how this gorgeous pup tilts his head and sticks his tongue out?

The Fox Terrier has the same colouring and a cheeky grin!

This is the dog from Turner and Hooch.You must admit they do have a resemblance!

The featured image shows actor Samuel L Jackson sporting a beret and glasses. The handsome Boxer has the same accessories, look how similar they look?

Which one is your favourite?

Thank you for reading, let me know in the comments if you spot any doggy lookalikes! 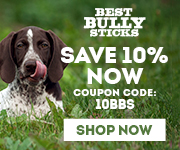