Molly Watson has had enough. Engaged for the last three years to a penny-pinching pedant, she finally decides she’d rather be a surplus girl than marry a man she doesn’t truly love. Aware of the need to support herself if she is to remain single all her life, she joins a secretarial class to learn new skills, and a whole world opens up to her.

When she gets a job at St Anthony’s Orphanage, she befriends caretaker Aaron Abrams. But a misunderstanding leaves them at loggerheads, and damages her in the eyes of the children she has come to care so deeply about. Can she recover her reputation, her livelihood, and her budding friendship, before it’s too late? 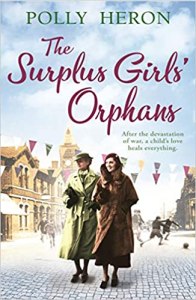 Early last year I was introduced to the first instalment of ‘The Surplus Girls” trilogy and loved every page. This second in the series is equally engaging and well written, an absolute must for lovers of historical fiction. The Surplus Girls’ Orphans’ can be read as a standalone novel but I highly recommend that you start at the beginning because the first book is just too good to miss!

To clarify, a Surplus Girl was a term given to women who had to support themselves after many men were killed during the war. Many were expected to remain in mourning and it was frowned upon if a woman wanted to better herself to lead an independent life.

Molly didn’t start as a Surplus Girl. She was engaged to a controlling and financially mean man. She liked her job in Upton’s sweet shop but something told her that she could do better. She was encouraged to apply for a job  at the Board of Health and decided to break off her engagement and enquire about the position which involved helping out desperately poor families.

After securing her new position Molly attends the local business school for Surplus Girls to learn secretarial skills.Here she meets the wonderful Miss Hesketh sisters who run the school and she goes to live there as a paying guest. When a secretary at the local orphanage falls ill, Molly is sent  to help out with administration and she meets caretaker Aaron Abrams.

The book  is set in Manchester, in 1922 and highlights just how hard it was for people after the war years, especially women and children. Polly Heron develops amazing characters and her story telling skills are hard to beat.Serious subjects are covered making the book interesting and informative but there is also tremendous warmth and humour in the story. The novels are extremely well researched and really take you back to a time that should never be forgotten.

Thank you to the author for a copy of the book, which I have reviewed honestly.

My review of The Surplus Girls