Three brothers are at the funeral. One lies in the coffin.

Will, Brian and Luke grow up competing for their mother’s unequal love. As men, the competition continues – for status, money, fame, women …

They each betray each other, over and over, until one of them is dead.

But which brother killed him? 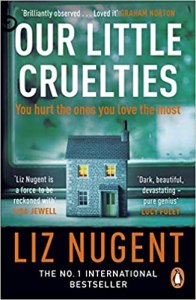 This is the story of three brothers William, Brian and Luke Drumm, who grew up in Ireland. The book starts with two of the brothers attending the funeral of the third, but which one remains a mystery.

We hear the brothers stories of their childhood, relationships and careers from their own perspectives and covering many years. The brothers are equally unlikeable and thrive on deceit and betrayal of others and each other. This is partly explained when the relationship between the boys and their mother is revealed. She is a vain, selfish and narcissistic, traits which are passed on to her offspring in varying degrees.

This is not a classic psychological thriller, more of a dark family drama centred around a dysfunctional family. The writing is engaging despite the characters being distinctly flawed and I was eager to find out which brother died. The writer does not shy away from some sensitive subjects including mental health issues, drug and alcohol abuse and sexual assault.

I will be looking out for new publications by Liz Nugent in the future.

Thank you to Penguin for a copy of the book, which I have reviewed honestly.