How To Exercise An Aggressive Dog

This post comes from a discussion I had in a dog forum recently about exercising reactive dogs or dogs with the potential to be aggressive.

Here is the problem.

My rescue dog is unpredictable and can react aggressively if he feels he is under threat. He is fine with other dogs, and most people, but I can’t take the chance, (he has bitten in the past!)

I always keep him on a close lead and walk him at quiet times of the day. However, children are always approaching him because he is small and cute. I pick him up whilst trying to explain to the parent that the dog is reactive to strangers.

Then there is the person who insists on stroking him, even when I ask them not to!

Here is what people have said to me in the past.

I’ve had dogs all my life.

He won’t bite me

He looks friendly to me

This is what I hear every day!

I would love to say  Just Leave Him Alone!

If a dog has a tendency to be aggressive, it can only gain from exercise. In fact, the lack of exercise will make nervous anxiety and stress build up, and the problem could become far worse.

If you feel stressed whilst walking with your dog he will feel the tension through the lead, so it is important that you do everything you can to relax.

However, with an aggressive dog, this is easier said than done. As I stated earlier there is always the chance that someone could approach your dog. There are also other triggers which you have to look out for, like traffic, pushbikes, loud noises etc.

It is well known that a well-exercised dog is less likely to show unprovoked aggression. So by establishing a regular walking routine, the dog should start to act in a much more relaxed manner.

I once walked a foster dog on a thirty-foot lead every day. The dog needed to let off steam but I was unable to let her off the lead due to a past history of biting. This wasn’t without its problems because the lead was heavy, especially when it got wet. but the dog’s behaviour improved dramatically.

Another suggestion is that the dog could wear a coat, bandana or lead which signifies that he is a nervous dog or one that needs his space. Strangers can instantly see that the dog should not be approached by the distinctive yellow colour.

A further suggestion was that I should muzzle Darcy when he is on walks. I was worried that he would lose sensory enjoyment when wearing a muzzle, however, I was reassured that there are types which don’t hinder the dog’s ability to smell or bark. Someone is a lot less likely to approach a dog wearing a muzzle, so just the sight of one should act as a deterrent. 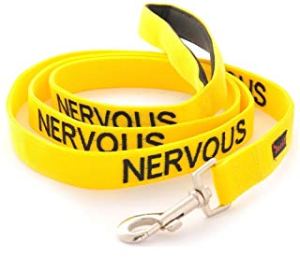 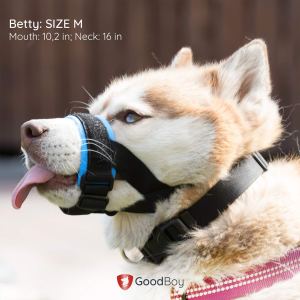 Does anyone have any other suggestions?

One thought on “How To Exercise An Aggressive Dog”