Staffordshire Bull Terriers, Why Do They Have Such A Bad Reputation?

Anyone who has ever walked around a dog rescue centre in the UK will know that there is a higher percentage of Staffordshire Bull Terriers than any other breed looking for forever homes. Due to the high numbers, there is less chance that they will be rehomed quickly. Consequently, hundreds are put to sleep through no fault of their own.

Why do Staffie’s end up homeless?

The muscular body and large jaw give the impression that these dogs are menacing. In fact, they are far from it. Without suitable training, any dog can become aggressive and even the smallest breeds can produce a nasty bite if they are handled incorrectly. This breed is often seen accompanied by gangs of youths or chained outside buildings. When an owner realises how much work is involved, the dogs are discarded, handed to dog fighters or passed on to another unsuitable owner. The breed is well known for being quick to learn and eager to please, however, the downside to this is that they can easily pick up bad behaviour just as quickly.

These dogs are still being bred and sold on for large amounts of money, despite rescues overflowing with them. If the dogs are not neutered there is a high chance they can produce many litters over a lifetime. Surplus puppies end up in rescue and the breeders just go on to breed from them again.. a vicious circle!

Due to unresponsible breeding, SBTs are often part of mixed breeds or mongrels, but the offspring still strongly resemble the Staffie. Therefore, a dangerous dog may only be part Staffie but because of their appearance, the Staffie breed gets a bad reputation.

We have all seen upsetting headlines concerning Staffordshire Bull Terriers. Unfortunately, when unscrupulous breeders produce litters just to make money they are not going to care who is buying them. A Staffie is a powerful dog which needs a good training programme starting with a good breeder, then on to the owner at 9-12 weeks. Any dog which is not trained properly can become aggressive, it is not fair to blame Staffordshire Bull Terriers. Sadly, this breed is more likely to live their lives on the end of chains, given no social training and unneutered.

4 The similarity to Pit Bull Terriers.

The Act is often criticised for taking an approach of ‘banning the breed rather than the deed’. Dog Experts believe that the dog’s temperament is due to the way a dog is bred and trained rather than his/her actual breed. 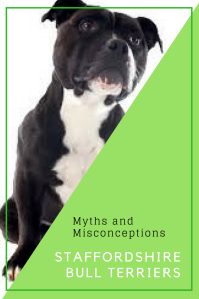 Far from the Staffordshire Bull Terrier being a dangerous breed they have been described as the ‘Nanny Dog’ . These dogs adore human contact and have a maternal tendency towards children.

Staffies are believed to have a bigger bite pressure than any other dog. However, when tested, the German Shepherd, Doberman, and  Rottweiler had greater bite pressure *

Another myth is that Staffordshire Bull Terriers are not good with other dogs,  In fact, Staffies are just as likely to be the ‘nanny’ to other dogs in the home and often live harmoniously with cats. Again, socialisation is a top priority.

People also believe that Staffie’s have a ‘locking jaw’, where the top and bottom jaws lock together. This is also a myth. Police dogs are trained to hold on to suspects until instructed otherwise but no dog has the capability to ‘lock’ its jaw. Instinctively, terriers will hold on for dear life, but should be trained to ‘leave’ on command. 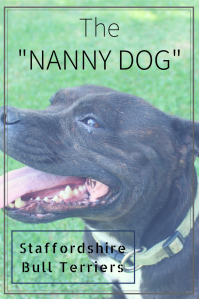 What can be done?

1 Stop irresponsible breeding, neuter, spay and consider rehoming a Staffordshire Bull Terrier rather than buying one.

3 Encourage the government to crack down on back street breeders, dog fighting, and dog neglect.

4 Give these lovely dogs a chance!

They love to play and will attach themselves to a favourite toy.

Good with children with the nickname, ‘The Nanny Dog’

They have big personalities and show loyalty and devotion.

SBTs are adaptable to change, as long as they still have their family around them.

They will only bark when absolutely necessary.

Staffies pick up on people’s feelings instinctively, they are tuned in and adapt to how their owner is feeling.

They are known to greet strangers in a friendly way, with a waggy tail and relaxed state of mind.

They need training from day one with a firm but fair approach.

Staffies can suffer from separation anxiety, they hate being alone, therefore a home where the owner is mostly at home is advised.

They can have a stubborn streak and will choose to ignore commands if the mood takes them.

Some will try to test boundaries, therefore, they need to be set firm rules right from the start.

Like most dogs, Staffies shed their fur, especially in Spring and Autumn, this can be minimised by investing in a good quality grooming tool.

I would really love to hear all your positive stories about these delightful dogs. Comment below if you know an adorable Staffordshire Bull Terrier. Let’s try to get this breed the reputation that it deserves.

Dog breeds that are good with children

What you need to know before adopting a rescue dog.