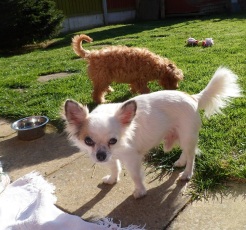 Harvey was enjoying his life so much , obviously feeling so much better on the medication which the rescue was providing for him. We knew that the damage was irreparable so it was a mission to give Harvey the very best life could offer whilst he was still with us.

He hated Alfie with a passion! Apparently this happens when an ex stud dog meets another male. It certainly wasn’t anything Alfie did, he seemed most bemused by the snarling, growling chihuahua who obviously wanted his blood. It was difficult keeping them separate , for Alfie’s safety, but that’s what we had to do.

With anyone else Harvey was a complete angel, he loved the company of children and gave everyone a warm welcome even Holly.  He loved the feel of the sun on his fur, would be out in the garden all day and soon it felt like he’d always been here. He even slowly accepted Alfie, they were never exactly friends but we got Harvey to trust Alfie so they could be in the same room together.

The rescue people were always eager for updates on Harvey and he became quite the celebrity. One lady knit him a beautiful blanket , he enjoyed opening his gift so much, he jumped into the box he was so excited.

He was so determined and if he wanted to do something he did it! I gave up trying to help him up the stairs or on to the sofa. I felt torn knowing that the exertion could be too much for him but letting him do what he was so desperate to do himself.

He never showed any self-pity, he held his head high and fought like a lion to get through every day. He was meticulously clean right to the end, the most proud and dignified dog I had ever known.

One thought on “Harvey’s New Lease of Life”